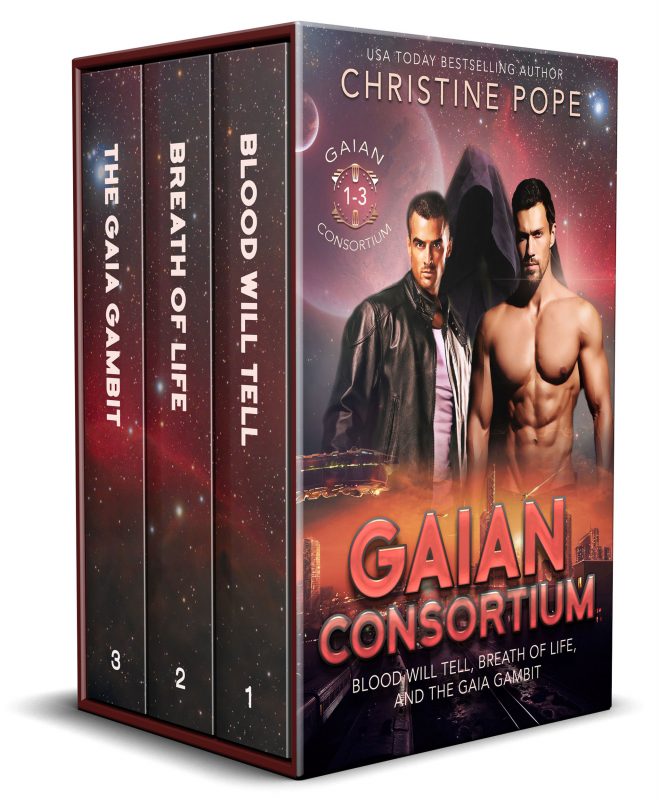 Welcome to Iradia, where the Gaian Consortium looks the other way if enough money changes hands, and the best way to ensure a long life is to secure passage off-world....

When Miala Fels’ father is murdered by a vicious crime lord, she decides the best way to get her revenge is to hack the accounts of the man responsible and bleed his hoard of ill-gotten loot dry. Her plans go awry when Mast is killed by a rival, and she ends up nursing one of his men, the notorious mercenary Eryk Thorn, back to health. Her only thought is to have Thorn help her get off-world in exchange for half of Mast’s treasure. The last thing she expects is to lose her heart to him...or to have the consequences of that love change her life forever.

Anika Jespers, a homesteader’s daughter on a Gaian colony, thinks she’s destined for a dull existence on her family’s farm. But when her father makes an impossible bargain with their neighbor, one of the alien Zhore, she faces a future different from anything she could have possibly imagined.

The familiar story of Beauty and the Beast takes on new life in this SF romance novella, with the Beauty a homesteader’s daughter and the Beast an alien on a faraway colony world.

Humans and Stacians have been sworn enemies for centuries, so Gaian Captain Lira Jannholm has no reason to trust Stacian starship commander Rast sen Drenthan when he proposes a bargain that will end a dangerous confrontation over a resource-rich planet. When Lira finds herself disgraced and discharged from duty through no fault of her own, she joins forces with Rast to discover the truth behind her reversal of fortune.

Running from ever-multiplying enemies in a ship stolen from one of the most powerful criminals in the sector, Rast and Lira discover they are pawns in a conspiracy that reaches into the highest levels of government and has put them in mortal danger. The secret they uncover could change the balance of power in the galaxy forever...not to mention destroy their own future together.

“Shades of Dirk Pitt! Our hero outshines him, traveling the entire galaxy, rescuing the fair maiden (and being rescued by her too), solving mysteries, uncovering conspiracies, beating up bad dudes, outwitting aliens, and other assorted plots. This box set has it all: fantasy, science fiction, mystery, and love.”—Amazon reviewer