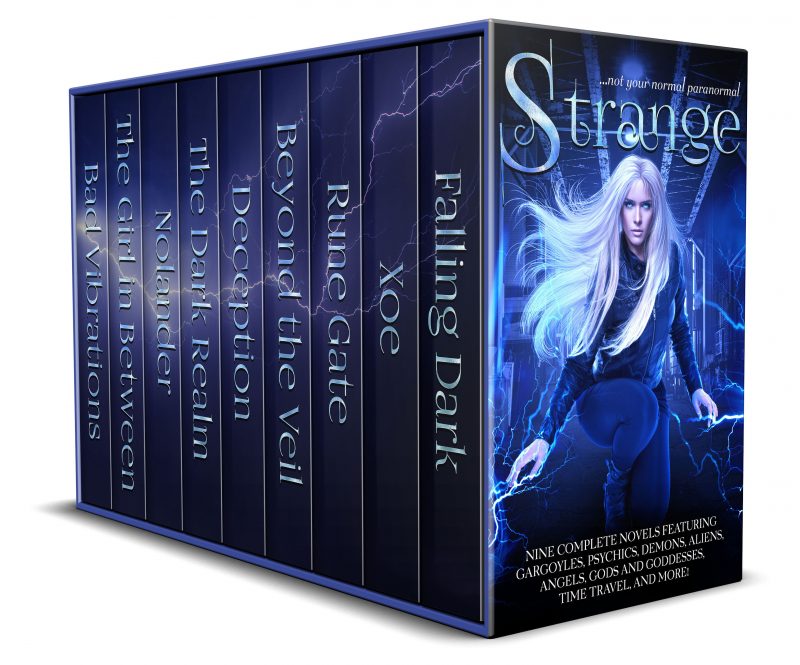 Dive into nine different worlds that aren’t your normal paranormal. These aren’t your run-of-the-mill vampire, werewolf, and witch stories. Immerse yourself in these unique, full-length novels from national bestselling authors:

When a reluctant psychic is drawn into a thousand-year war between gargoyles and vampires, all hell breaks loose in the City of Angels….

Xoe has a problem. Scratch that, she has many problems. Her best friend Lucy is romantically involved with a psychotic werewolf. Her father might be a demon...and her possible love interest is a vampire.

Beyond the Veil ~ Pippa DaCosta

Muse must decide whether to trust a Prince of Hell or the assassin sent to kill her. Little do they know, she’s more dangerous than both.

After meeting a gorgeous stranger on a blind date, Alexis feels like she's known him her entire life. Suddenly, dark long-forgotten memories swirl in her mind. She realizes she's powerful, stunningly beautiful, and marked for death.

What if a high-tech computer game was a gateway to the dangerous Realm of Faerie?

Feyland is the most immersive computer game ever designed, and Jennet Carter is the first to play the prototype. But she doesn't suspect the virtual world is close enough to touch — or that she'll be battling for her life against the Dark Queen of the faeries.

Tam Linn is the perfect hero, in-game. Too bad the rest of his life is seriously flawed. The last thing he needs is rich-girl Jennet prying into his secrets, insisting he's the only one who can help her.

Together, Jennet and Tam enter the Dark Realm of Feyland, only to discover that the entire human world is in danger. Pushed to the limit of their abilities, they must defeat the Dark Queen…before it's too late.

As an orphaned and perpetually single photographer in a tiny rural town, Beth Ryder Knows she’s different. Still, when strange monstrosities begin cropping up in her photos, she thinks it’s a cruel joke, until she’s plunged into a world she never knew existed.

The Girl In Between ~ Laekan Kemp

Bryn Reyes is a real life sleeping beauty who spends most of her time alone in a dream world made up of her memories. Until one day a boy she’s never met before washes up on the illusory beach of her dreams with no memory of who he is.

Alex Yorke is a top police clairvoyant on the edge of sanity. Living inside the heads of serial killers has taken its toll. Can she do it one last time?

When psychic Persephone O'Brien reaches out to famous ufologist Paul Oliver for help, they soon find themselves drawn into a far-reaching alien conspiracy that sends them on the run...and into one another's arms.

“This curated experience was better than I honestly expected. These aren’t a mash up of throw away stories that didn’t make the cut somewhere. Each book is unique to the group, with such a variety that I imagine everyone would enjoy at least one. There are some mature themes with only one or two heavily aimed at a younger audience. There are some really thought-provoking ideas and emotions in unexpected stories.”—Amazon reviewer