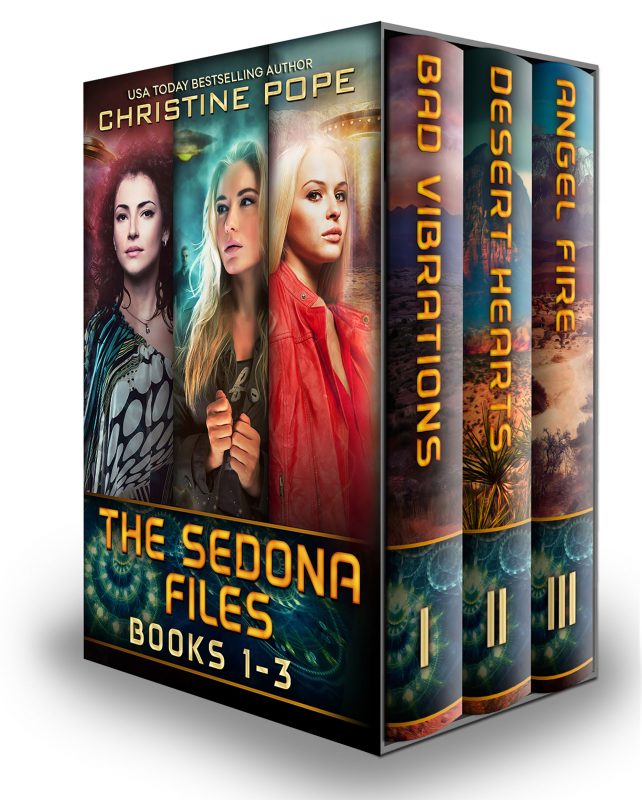 The Sedona Files series follows the lives of a group of women as they work to foil an alien invasion...and just happen to fall in love along the way. This boxed set includes the first three books in the series:

She thought she could see it all… He showed her so much more.

Psychic Persephone O’Brien thinks she’s always prepared for the unexpected, but when she reaches out to UFO expert Paul Oliver for help, the two of them soon find themselves drawn into a far-reaching conspiracy that sends them on the run — as well as into each other’s arms. And after Paul is captured by sinister agents, Persephone finds herself joining forces with an unlikely group of UFO hunters to rescue Paul and derail an alien plot before it’s too late.

He needs her help.  She’s his only hope.  But he’s hiding something…

When a sexy stranger with no memories of his former life staggers out of the desert, pleading for Kara Swenson’s help, she can’t refuse — despite her better judgment. After all, being involved in the UFO community for many years has made Kara open to the strange and unusual. What transpires between Kara and the stranger is intimate and sensual, leading to complications Kara is forced to confront. And when the shocking truth of the stranger’s identity is revealed, Kara finds herself having to make a choice between the truth of her heart and an uncertain future.

The winter brings more than just a chill…

When strange forces begin to threaten her hometown, it’s up to Kirsten Swenson to save her friends and family from certain destruction. Agreeing to work with a mysterious Man in Black proves to be more than Kirsten ever bargained for, because Agent Martin Jones is far more than he seems. With his ability to awaken the powers that have lain dormant within her, Martin draws out the shocking secrets that were buried in Kirsten’s past, while also encouraging her to give in to her heart. But when the aliens force her to make the ultimate sacrifice, Kirsten realizes that sometimes following her heart isn’t enough.