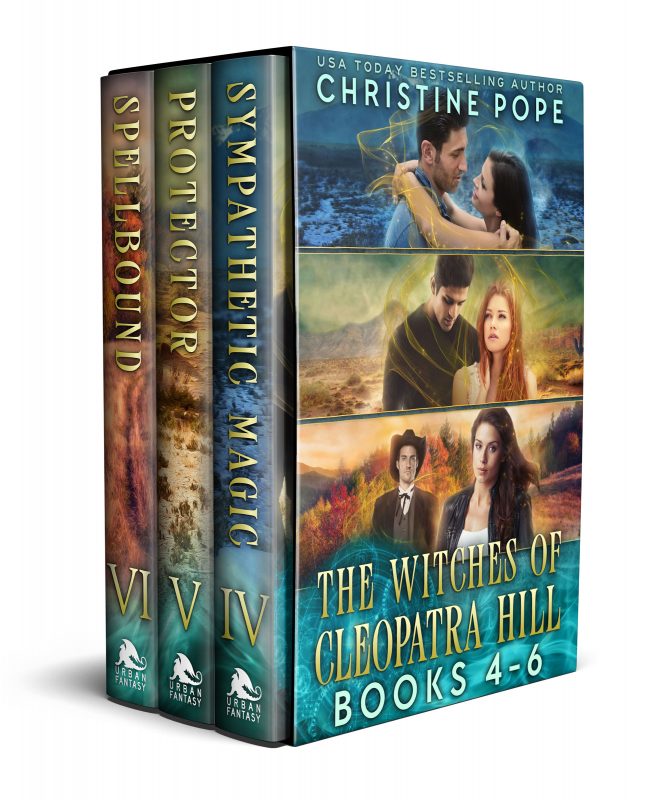 Some guys have all the luck….

Warlock "Lucky" Lucas Wilcox has a gift that ensures his success in all things, but his magic fails him completely when it comes to sexy Margot Emory, the vibrant “elder” of the McAllister witch clan.

Margot’s own magical gifts weren’t enough to protect her from a terrible romantic betrayal, and she’s wary of repeating past mistakes—especially with a Wilcox—even if it means she’s destined to live her life alone.

When Lucas sets his sights on the one woman he wants but can't have, it may take a bit of sympathetic magic for the couple to have the happy ending they deserve. (Book 4 of the Witches of Cleopatra Hill)

Caitlin McAllister has been keeping a secret. While her clan suffers for lack of a seer, she’s been hiding her gift of second sight — hiding and running away from a destiny she does not want and has done her best to escape. Unfortunately, she finds that keeping secrets carries its own price when she and two of her friends end up in the hands of three evil warlocks who seem intent on using the young witches for their own dark purposes.

Far from her clan’s territory, Caitlin turns to Alex Trujillo, whose grandmother is the prima of the de la Paz witch clan and whose own gift is the ability to cast a unique kind of protective spell, to help her with tracking down the warlocks who kidnapped her friends.

As Alex and Caitlin work together to save her friends, they find themselves falling under one another's spell. But their combined talents may not be enough to save the kidnapped witches…or to stop a murderous conspiracy that threatens the safety of all the Arizona witch clans.

Saving his past could destroy her future…

Damaged and desperate, Danica Wilcox searches for sanctuary and peace of mind after enduring vile and brutal treatment by the dark warlock Matías Escobar. Hoping for safe haven at an old summer cabin owned by the Wilcox witch clan for more than a hundred years seems to be her safest option. But when her rejuvenating R&R is interrupted by a ghostly visitor, Danica sets out to solve the mystery of his death.

Determined to uncover long-hidden truths, Danica takes a journey into the past, calling upon her own special gift of manipulating time. However, the secrets that she uncovers were meant to remain buried. Torn between loyalty to her family and the beyond-earthly pull she feels for the mysterious stranger, Danica struggles between what is right and what is wrong, between changing the past and altering the future. Can Danica save her “ghost’s” life without destroying the Wilcox clan entirely?

“I immensely enjoyed reading each of these three books in this volume. Sympathetic Magic was a sweet story of “Lucky” Lucas Wilcox and his endeavors to woo prickly and up-tight Margot Emory. The next book in this volume is Protector. This story is action-packed and very suspenseful with of course, a lot of romance. The third book in this volume is Spellbound — which continues on with Danica Wilcox’s story who was one of the characters from the previous book, Protector. Spellbound has a lot of romantic suspense along with time travel.“—Amazon reviewer