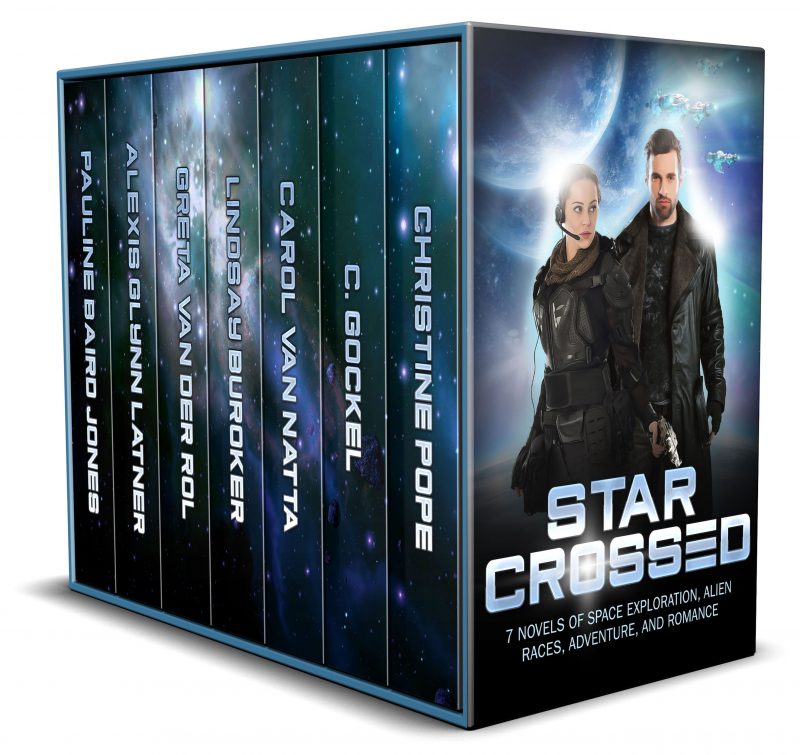 Sci-fi to fall in love with…

Seven full-length novels that explore the future without forgetting that the most dangerous battles will always be within the human heart. Aliens, AI, cyborgs, galactic empires, space battles, and romance…you’ll find them all here, along with heroines and heroes you’ll cheer for.

Blood Will Tell – Christine Pope
When hacker Miala Fels makes a deal to split the hoard of a dead crime lord with the notorious mercenary Eryk Thorn, events take an unexpected turn….

Archangel Down – C. Gockel
Commander Noa Sato is arrested and interrogated for her part in the Archangel Project. A project she knows nothing about. Professor James Sinclair awakes in the snow knowing only one he must find Noa, a woman he’s never met. In the face of genocide they must hatch a daring plan with a ragtag crew to save the lives of millions—and their own. Every step of the way they are haunted by the final words of a secret transmission: The archangel is down.

Overload Flux – Carol Van Natta
Someone is stealing the vaccine for a galaxy-wide pandemic. Investigator Luka Foxe’s hidden mental talent is out of control, and security specialist Mairwen Morganthur hides a dark past. On a convoluted trail of corrupt pharma corporations, murderous mercenaries, sabotage, and deadly space battles, their only hope for survival lies in trusting one another.

Star Nomad – Lindsay Buroker
The Alliance has toppled the tyrannical empire. It should be a time for celebration, but not for fighter pilot Captain Alisa Marchenko. After barely surviving a crash in the final battle for freedom, she’s stranded on a dustball of a planet, billions of miles from her young daughter. She has no money or resources, and there are no transports heading to Perun, her former home and the last imperial stronghold.

The Iron Admiral: Conspiracy – Greta van der Rol
Thrust together in a race against time, ex-Admiral Chaka Saahren and Systems Engineer Allysha Marten, must resolve their personal differences to prevent an inter-species war.

Hurricane Moon – Alexis Glynn Latner
With Earth wracked by climate change, an ambitious private foundation launches a starship to discover a new world. The astronauts and scientists of Aeon are prepared to cope with every known outcome and every foreseeable unknown. But what they encounter on the other side of the stars is the unknown unknown.

The Key – Pauline Baird Jones
The key will unlock more than an unknown civilization; it will define who one woman will become…Elite pilot, Sara Donovan and resistance fighter, Kiernan Fyn must stop those that would use the key for their own agenda. Don’t miss out on this Independent Book Bronze Medal and Dream Realm Awards Winner!