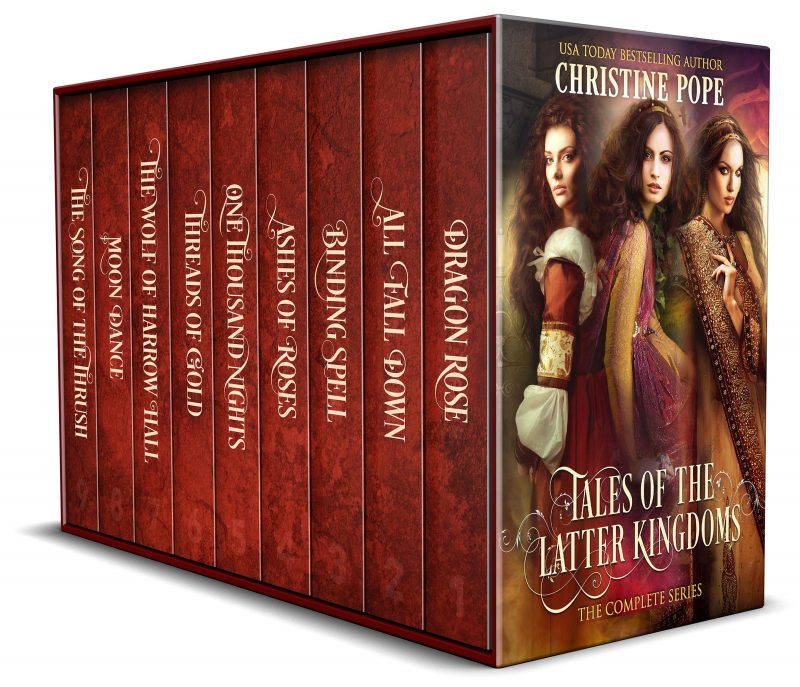 This jumbo boxed set includes the entire Tales of the Latter Kingdoms series — nine complete fantasy romance novels in all!

DRAGON ROSE: The Dragon’s bride seeks to solve the mystery of her new husband’s curse in this retelling of Beauty and the Beast.

ALL FALL DOWN: Held captive in a strange land, a healer must find the strength to fight the reappearance of a deadly plague.

BINDING SPELL: The laws of the land dictate that magic is outlawed...but Lark Sedassa’s magic may be the only thing that can save them...including the man who has made her his bride.

ASHES OF ROSES: A disinherited daughter, an Emperor seeking true love, a pinch of magic — all come together in a fresh retelling of Cinderella.

ONE THOUSAND NIGHTS: Betrayed by his first wife, the ruler of Keshiaar vows he will never love again. But fate has different plans for him in this fantasy version of the Thousand and One Nights.

THREADS OF GOLD: Annora’s nimble fingers — and a magical gift from a mysterious stranger — provide the king the gold he desires. But Annora soon realizes that the gold which should have been her escape is only a trap in this retelling of Rumplestiltskin.

THE WOLF OF HARROW HALL: A desperate mission to save her grandmother’s home ends with Bettany trapped in dour Lord Greymount’s home in this romance inspired by Little Red Riding Hood.

MOON DANCE: When Iselda’s cousins go missing from their castle in the middle of the night, she determines to solve the mystery of their disappearance. What she finds leads her into a new world of enchantment…and love. A retelling of The Twelve Dancing Princesses.

THE SONG OF THE THRUSH: A slip of the lip earns Marenna her father’s fury — and marriage to a perfect stranger. But it’s only by allowing love to blossom that she can discover the truth of her heart in this romance inspired by the King Thrushbeard fairy tale.

This boxed set is not available on Amazon because of the low royalty rates paid for books priced over $9.99.

Disclosure of Material Connection: Some of the links in the page above are "affiliate links." This means if you click on the link and purchase the item, I will receive an affiliate commission. I am disclosing this in accordance with the Federal Trade Commission's 16 CFR, Part 255: "Guides Concerning the Use of Endorsements and Testimonials in Advertising."