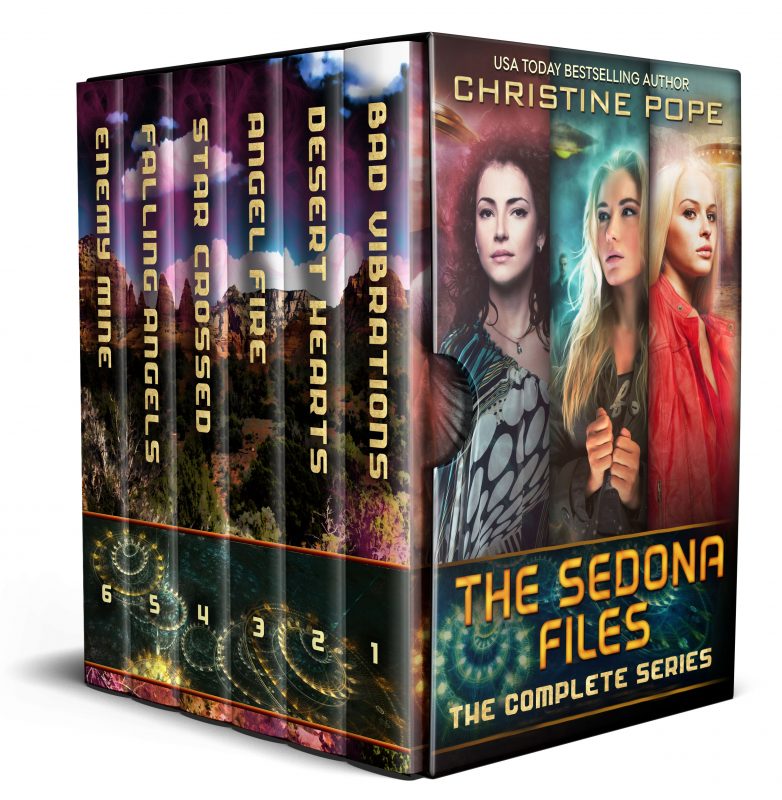 This boxed set includes all six books in the Sedona Files series:

She thought she could see it all…
He showed her so much more.

Psychic Persephone O’Brien thinks she’s always prepared for the unexpected, but when she reaches out to distractingly attractive ufologist Paul Oliver for help, the two of them soon find themselves drawn into a far-reaching conspiracy that sends them on the run — as well as into each other’s arms. And after Paul is captured by sinister agents, Persephone finds herself joining forces with an unlikely group of UFO hunters to rescue Paul and derail an alien plot before it’s too late.

He needs her help.
She’s his only hope.
But he’s hiding something…

When a sexy stranger staggers out of the desert, pleading for Kara Swenson’s help, she can’t refuse — despite her better judgment. After all, being involved in the UFO community for many years has made Kara open to the strange and unusual. What transpires between Kara and the stranger is intimate and sensual, leading to complications Kara is forced to confront. And when the shocking truth of the stranger’s identity is revealed, Kara finds herself having to make a choice between the truth of her heart and an uncertain future.

The winter brings more than just a chill…

When strange forces begin to threaten her hometown, it’s up to Kirsten Swenson to save her friends and family. Agreeing to work with a mysterious Man in Black proves to be more than Kirsten ever bargained for, because Agent Martin Jones is far more than he seems. With his ability to awaken the powers that have lain dormant within her, Martin draws out the shocking secrets that were buried in Kirsten’s past, while also encouraging her to give in to her heart. But when the aliens force her to make the ultimate sacrifice, Kirsten realizes that sometimes following her heart isn’t enough.

She loves what she can’t have.
Can she destroy what she loves?

During an attempted invasion by an army of reptilian aliens, Grace Rinehart’s father, an alien-human hybrid, sacrificed his life to save Sedona — ultimately destroying the alien base.

Now, twenty-five years later, Grace uncovers what was left behind: the prototype for version 2.0 of an alien/human super-soldier.

As they grow closer and the sexy soldier’s hidden secrets are revealed, Grace must face the truth of what the Reptilians have been plotting all along. Can Grace trust her heart, or will her distrust of the past destroy the future she wants so badly?

An alien spirit guide.
A desperate rescue mission.
And one passionate love affair.

Despite her own otherworldly origins, part-alien Callista Jones never expects to fall for former spirit guide Raphael, but she can't resist the intense attraction she feels for the handsome man. With her friends and family attempting to pull her away from him, her desire for Raphael only intensifies, driving a wedge between Callista and those she loves. When an alien conspiracy threatens their very existence, it's up to Callista to save them. But can she reconcile with her family and still have the angel who loves her?

She's the enemy's biggest threat.
But he just might be the savior they all need.

Although she inherited her mother's psychic gifts, Taryn Oliver didn’t foresee the consequences of possessing those special powers. After meeting the mysterious, half-alien Lir Gideon, she fights the attraction she feels for him, understanding that the very future of humanity could be at stake. What she doesn’t realize is that her connection with Gideon may be the key to saving not only everyone she loves, but the entire planet as well.